In a surprise story that appeared around the time that Villa secured Premier League survival (West Ham 1-1) – a report eminating from Portugal claimed Villa were set to part with Dean Smith. 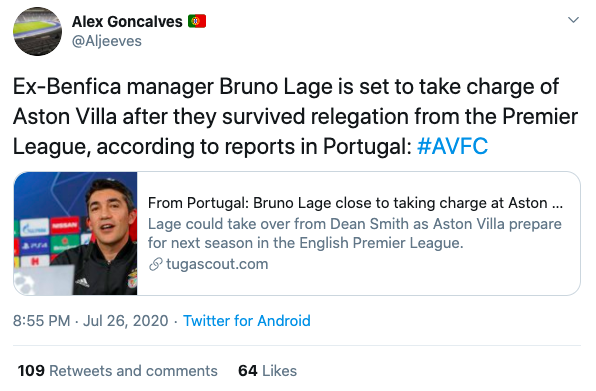 Those well acquainted with the fortunes of Swansea City and Sheffield Wednesday may recall that Lage was the assistant to Carlos Carvalhal during his stints at both clubs.

Given the possibility of Villa’s relegation on the final day, this story seems to have the definate waft of dubious timing about its appearance.  Though Villa had certainly been precarious in the league, the owners and club CEO Christian Purslow had been unwavering in their support for current boss Dean Smith.

Indeed, given Villa’s defensive improvements and having overhauled a 7 point deficit in securing Premier League safety, arguably Smith had achieved an objective few would have recently predicted.

It hasn’t always been pretty this season, far from it, but with Purslow having stated his belief that the club found itself promoted before it reasonably expected, perhaps Smith has pulled off another significant coup in managing to keep a decidedly miss-matched Villa squad up.

Most importantly, this left-field link to Lage, whilst gaining some virility across social media, was soon quashed by reputable sources:

It was also seperately confirmed that Villa’s owners, Sawires and Edens, along with CEO Christian Purslow had resolved to stick with Smith in the event that the club succumbed to a drop to The Championship.

As such, Dean Smith’s position as head coach at Aston Villa remains secure.