Has your heart rate settled yet?

Villa secured a vital point against West Ham this afternoon and with it retained our Premier League status.

What an unbelievable turnaround, against all odds – we did it!  Remarkable!

You can read The Villa Underground’s instant reaction here.

Find each individual Player Ratings below: 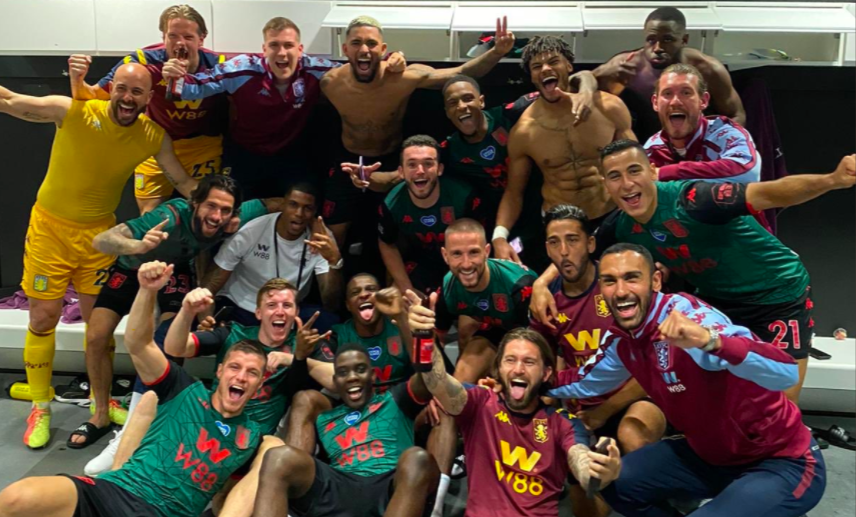 The on-loan AC Milan was untroubled for long periods, as against Arsenal, but was a calming and vocal from the back.  Was quick off his line to close down the angle’s as Antonio got free in the first half.  Could do little about the goal, that deflected wickedly over him following a Grealish challenge in the second half.  Interesting post-match interview, with Heaton still out injured and the Premier League back in September, perhaps this won’t be the last we see of the former Liverpool and Spanish international.

Had a hard task today and was given the runaround at times as West Ham moved the ball quickly into the channels.  Contributed at least 3 well time tackles with West Ham in dangerous positions.  Sometimes wasteful in possession having worked hard to retain it, but a good overall display.

Energetic and tireless until he ran out of steam in the second half.  Picked up from where he left off after an impressive display at Villa Park against The Gunners; always trying to get the ball forward too which gave West Ham something to think about.

A solid overall display and worked incredibly hard alongside Mings.  Guilty of missing a clearance of a fashion similar to the failed attempt to boot the ball to safety at Goodison Park, fortunately Antonio could only screw and effort wide of Reina’s post.  Has enjoyed good form post-restart and this was no different; great potential.

Vocal from the back, constantly audible, motivating and driving those in front of him on.  Physical and met everything thrown at him head on and a composed partner alongside the inexperienced Konsa.

Game by game McGinn’s stamina has improved, with his engine in much better shape for this game against West Ham.  Ran and ran, and could have had a couple of goals with a first half shot dragged wide and a second half effort lacking power.  His chasing was invaluable and played a big part in bringing home the point.

Read a McGinn pass and deftly laid off to Grealish in the first half, only for Jack to fluff a finish.  Also crossed a smart low ball in the second half only to see Samatta miss-kick his strike.  Vocal on the pitch and contributed a number of dangerous set plays.  Withdrawn in favour of Nakamba as Smith looked to shut up shop.

Snatched at an early opportunity after a McGinn header back when a little composure might’ve presented a better opportunity.  A really hard working display from the Egyptian who ran himself into the ground for his team-mates.  Always chasing and a constant nuisance down the right hand side for West Ham.  Whilst not always a cultured display, he was effective in his role as both a willing running and tracking back.  Was well positioned in the second half to intercept a dangerous Hammers move having read the play well.  Subbed late on having run himself ragged.

Another top display from the young Brazilian who has come into his own post-lockdown.  The former Manchester City midfielder was one of few to be consistent across all of our matches since the restart, with this display at The London Stadium no exception.  Never wasted possession and clever on a number of occasions, releasing Villa onto breaks further up the pitch.  Out-witted Declan-Rice in the second half, feigning a shot, luring a foul that gave Villa a free-kick in a dangerous position.  Superb again.

Had to bide his time as the focal point of West Ham’s attempts to stifle Villa’s attempts to play through him.  Had a great chance just before half-time after good work by McGinn and Hourihane flicking him a deft layoff – Grealish could only side-foot a weak effort to Fabianski – it was a great opportunity spurned just before the break.  As with the whole team, Jack emerged re-energised in the second half as Villa probed West Ham’s resolve.  Made space and fired a powerful effort, deflected wide on 77 minutes.  On 84 minutes received a McGinn pass before ghosting into the box, moved the ball and unleashed an unstoppable drive beyond the keeper.  Visibly emotional at the end amid confirmation that Villa’s Premier League status has been retained.

A big plus today was that Samatta was much more involved in the game.  After a number of anonymous displays this can only be a good thing.  Can appear in-decisive at times, evidenced by a delayed through ball, overhit, to Trezeguet in the first half.  Had his first effort on goal in 12 games, heading straight at the keeper after a driven Guilbert cross inside the first quarter hour.  Headed straight at the keeper again and jumped to early for a third effort, nodding a dangerous ball high over the bar.  Much still to improve and withdrawn for Davis.

Went near after a burst and strike across goal late in the second half.  Held the ball up a number of times.  Davis has certainly got something, but it remains to be see what role and future awaits him as Villa look to strengthen.

You can see The Villa Underground’s Reaction to the Villa’s survival and draw at West Ham here.